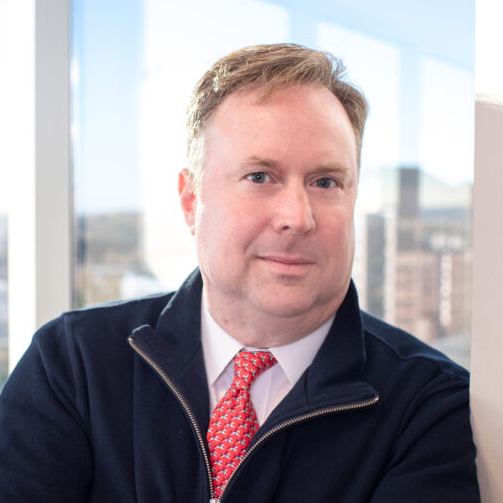 On September 28, the Bank of England (BoE) backstopped the gilt market, the British government debt market equivalent to the United States Treasury market. While the BoE pointed to “a specific problem” in the longer-termed gilt market, the reality is that this was a necessary liquidity operation. It is difficult to tell how big of a problem this will be for the United Kingdom, but for U.K. pension investors, it is a Minsky Moment.

“Stability leads to instability. The more stable things become and the longer things are stable, the more unstable they will be when the crisis hits.”
- Hyman Minsky

The phrase Minsky Moment is named after Hyman Minsky, an economist who focused on linking the fragility of financial markets with speculative investment bubbles. “A fundamental characteristic of our economy is that the financial system swings between robustness and fragility, and these swings are an integral part of the process that generates business cycles,” wrote Minsky.

The Minsky cycle is described as having three main phases.

Many of Minsky’s theories focused on the concept of unknown risks in the private sector pushing the economy into recession. The economist favored government intervention, both through regulation and monetary policy, to smooth the business cycle. Minsky’s theories were not popular during his lifetime, although he received more recognition following the 2009 housing crisis in the United States.

But back to England. The problem appears to be within the U.K.’s defined benefit pension plans. These are older plans, as almost all current British pension plans are defined contribution (i.e., U.S. 401(k) plans). The defined benefit pension scheme in the U.K. is about £2.0 trillion. These plans can leverage up to four times and often buy long-term gilts in order to match the money needed to be paid in the future.

Over the last several years, pension plans have tried to gain incremental income and remove volatility from their long-term gilt holdings by hedging through vehicles called Liability Driven Investment funds (LDI). As long as volatility was low, such as less than 2% annually, the contracts would have expired in the pension plan’s favor. Volatility spiked, increasing 3.6% from the start of the year until September 28, resulting in a capital call. Providing capital forced the pensions to sell gilts at depressed values, which drove down the value of gilts even further, exacerbating the very problem. 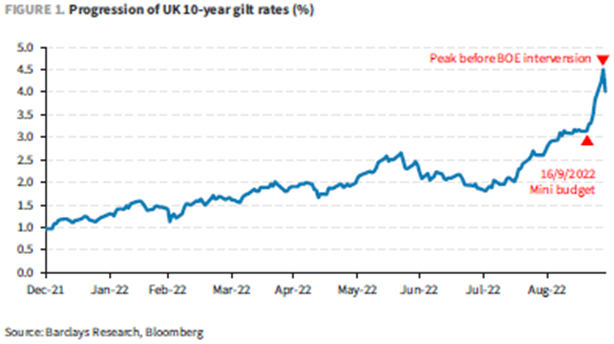 The BoE’s intervention attempted to provide stability to the gilt market. Rarely does a developed country see the yield of its sovereign debt increase from 3.2% to 4.5% (+1.2%) in a seven-day period. However, these liquidity injections could be detrimental to the inflation outlook and the BoE’s attempt to fight inflation through raising interest rates. Hopefully, the BoE bought enough time for the pension plans to stabilize their books and not require any further emergency liquidity.

Normally, the Bank of England’s purchase of gilts would not be of concern, but the announcement was likely the catalyst for some near term moves in global markets, including a decline in the rates for U.S. Treasuries. The current higher rate policy by Central Banks, both in the U.S. and abroad, is starting to show some strains on the global financial system. Other global macro instabilities include energy shortages in Europe, the war in the Ukraine, China’s rolling Covid lockdowns, and the negative impact of a stronger U.S. dollar to other currencies. There is no shortage of events to track.

From our perspective, now is the time to ensure you have a high-quality, well-diversified portfolio of stocks and bonds. Crawford Investment Counsel offers superior transparency, as our clients get to see each position held in their accounts, and none of those are higher risk items, like options, derivative contracts, credit default swaps, or LDIs. Investors need to know exactly what they own, not a fund or investment vehicle that could be hiding a mix of risky positions. Crawford has helped our clients survive the ups and downs of the market for over forty years with quality, dividend-paying stocks as the backbone to their portfolios, which will continue to be how we orient portfolios going forward.

Crawford Investment Counsel is an independent investment adviser registered under the Investment Advisers Act of 1940, as amended. Registration does not imply a certain level of skill or training. More information about Crawford Investment Counsel, including our investment strategies, fees and objectives, can be found in our Form ADV Part 2, which is available upon request.
There is no guarantee of the future performance of any Crawford portfolio.
This material is not financial advice or an offer to sell any product.
Crawford reserves the right to modify its current investment strategies and techniques based on changing market dynamics or client needs.